We’re reminded again how important flexibility is when traveling in Congo.

All the police want money since they’re not paid well (if at all) by the government. So they expect to be paid by travelers, especially westerners.

When Dale and Fred got off the plane in the small airport the police took their passports and sent them walking through the bush to the Provincial Commissioner’s office (approximately 3 miles).
They were escorted by the police because they thought Dale was a businessman. The church officials arrived. They explained that Dale and Fred are volunteers helping to put in a water supply.

The Provincial Commissioner saw that Dale came from Tanzania and that he speaks Swahili. They had a conversation about home and people. The PC let them go and told them to have a good time. He returned their passports. They parted good friends. What a relief!

God is soooooo good. Even though Dale’s Swahili isn’t very good at all, God put all the right words in his mouth. Fred wasn’t spoken to at all and doesn’t know Swahili. God obviously had that PC from Tanzania in that location for a reason.

Dale said that he felt like Paul before King Agrippa. Only praise God, neither of these men were in chains.

Dale and Fred made it to the village church conference center, home for the next 3 weeks for Dale. Fred will be staying longer. The village mamas made their food: Ugali ya muhogo and stew. Dale loves it.

They spent the evening sitting outside enjoying the sounds of village life. No traces of water underground yet.They’ll check other places.

In the meantime, enjoy the photos of the village welder. Have welder will travel–rather ingenious contraption–a homemade welder on a homemade cart.

This man makes his living traveling from place to place with his welder. As we’ve mentioned before, bicycles are extremely important in Congo. Here the welder is repairing someone’s bicycle. 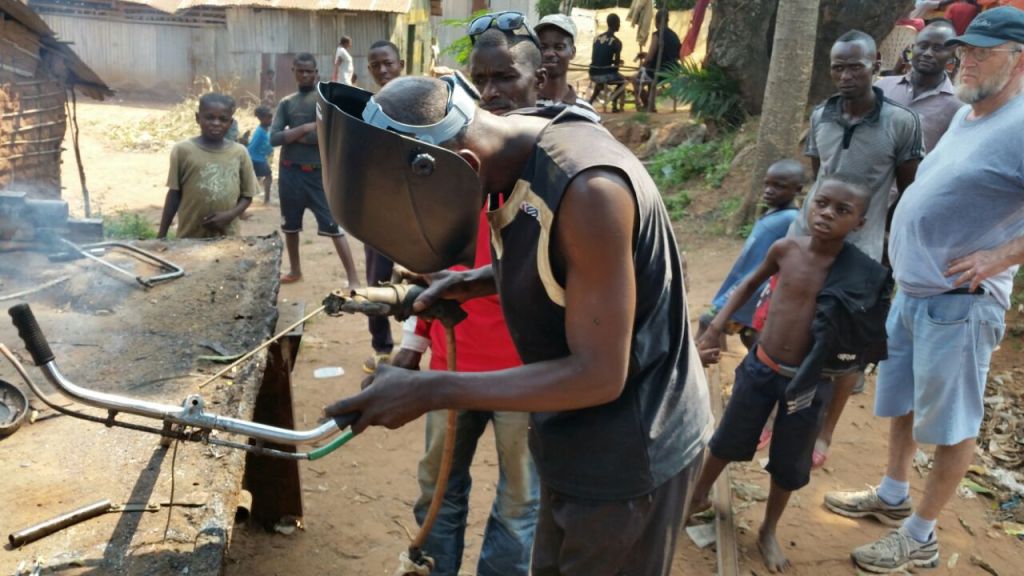