Today we start part 5 of the journey Stan and Brad took to Ndjoko Punda along with their driver and his mechanic. They are all exhausted from the difficult journey.

About 2:00 a.m. they pulled up a quarter mile from the Kasai River. What little road or track they had followed previously now ended completely.

Stan and Brad grabbed their backpacks and walked the remaining distance to the river. The steamy night air pressed heavy on them. The whole jungle felt like a giant sauna. No escape from the oppressive heat and humidity.

Brad took his hat off and fanned his face. It was the only breeze in the stifling air.

A short distance down river a Congolese policeman and several of his friends gathered around a large fire. They passed a bottle. One of the men fell over. The rest of the circle burst into raucous laughter.

The Kasai River roared past at the bottom of the embankment. Swollen from the rainy season, the wide river was treacherous. A group of young men lounged beside a thirty-foot canoe pulled up on the muddy bank.

A tall thin youth ran toward Stan and Brad. “It’s them, Dr. David. They’re here,” he called over his shoulder in Tshiluba.

Tshiluba, the language of the brothers’ childhood—its rhythm and pitch resonated with their souls. Like a welcome breeze, it rushed over them and refreshed their weary spirits. They were nearly home.

Dr. David came forward. “My brothers! I was getting worried you wouldn’t make it through tonight.”

“It was a long hard drive. We’re bone-tired, but we’re here.” Stan stretched out his hand.

Dr. David grasped it and pulled Stan into a hug. “So good to have you come back to us. God has answered our prayers for your safety.”

“He’s also answered our prayers. We’ve brought all the medical supplies you asked for,” Stan said.

David hugged Brad, too. He grinned broadly at both of the men. “We are honored you have come back to us.” 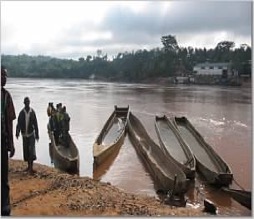 The doctor gestured toward the youths. “I’ve brought good workers from our church to help. Come boys. Let’s get everything loaded into the canoe.”

The young men chattered as they returned with all the bundles. They were almost finished packing the canoe when the policeman came. His drinking buddies trailed behind. Together the policeman and his friends formed a line, blocking Stan and Brad’s way to the river.

In a drunken drawl, the policeman yelled a demand. “Let me see your papers!”

“You don’t need to see their papers. These men are the children of former missionaries. They’ve come to help our village. They’ve brought supplies for the hospital,” Dr. David said.

“Are you interfering with me?” The policeman bellowed his question. He waved the doctor aside.

What do you think will happen? Why does the policeman want to see their papers? We’d love to hear from you. Join us next Thursday for Part 6. 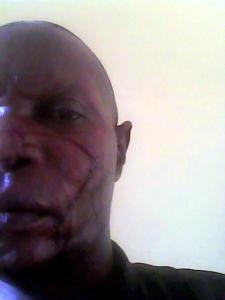 One of their coaching team members, Albert Mulamba in Tshikapa, Congo was returning from a meeting of provincial church leaders on Sunday – where among other things he was sharing with them about the Congo Leadership Coaching Network – when a drunk man stepped in front of his motorbike. The man’s head cut a large and deep gash in Albert’s face (Albert was wearing a helmet, but not a face guard).

He received internal and external stitches and is now at home recovering. Apparently the drunk man, while undoubtedly bruised, was largely unhurt and stumbled off. Albert, on the other hand, was left bleeding profusely from the face and somehow got himself to a clinic where he could receive help. He now describes his whole body as racked with pain. Thanks for keeping him in your prayers.

Silver lining here: Fortunately his wife Aberty just returned to Tshikapa from Kinshasa where she was with the rest of their family and had planned to stay through Christmas. Now she’s returned just in time to take care of Albert.

You may remember our story about Albert titled, “A Lonely Ride.”