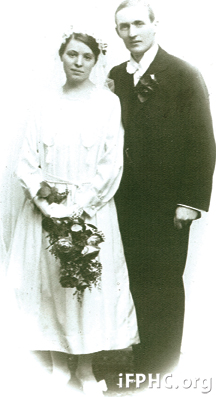 We’re telling the story of the missionary couple, David and Svea Flood. The story is adapted from their daughter, Aggie Hurst’s personal account, but the story is really about so much more than their little family. Today we begin Part 3. If you missed earlier portions of the story, you can find them here: Part 1 and Part 2.

For Rev. Dewey and Aggie Hurst’s twenty-fifth wedding anniversary (in the 1960s), the college presented them with the gift of a vacation to Sweden. There Aggie met her biological father. An old man now, David Flood had remarried, fathered four more children, and generally dissipated his life with alcohol. He had recently suffered a stroke. Still bitter, he had one rule in his family: “Never mention the name of God because God took everything from me.”

After an emotional reunion with her half brothers and half sister, Aggie brought up the subject of seeing her father.
Her siblings hesitated. “You can talk to him,” they replied, “even though he’s very ill now. But you need to know that whenever he hears the name of God, he flies into a rage.”

Aggie would not be deterred.

When she entered her father’s squalid apartment, she found it littered with liquor bottles everywhere. Her seventy-three-year-old father lay in his rumpled bed.

He turned and began to cry. “Aina,” he said, “I never meant to give you away.”

“It’s all right Papa.” She took him gently in her arms. “God took care of me.”

“God forgot all of us. Our lives have been like this because of Him.” He turned his face to the wall.

Aggie stroked his cheek and continued, undaunted. “Papa, I’ve got a little story to tell you, and it’s a true one. You didn’t go to Africa in vain. Mama didn’t die in vain.

“The little boy you both won to the Lord grew up to win that whole village to Jesus Christ. The one seed you planted just kept growing and growing. Today (about 1964) there are six hundred African people serving the Lord because you and Momma were faithful to the call of God on your life.

“Papa, Jesus loves you. He has never hated you.”

The old man looked into his daughter’s eyes. His body relaxed and he began to talk. By the end of the afternoon, he had come back to the God he had resented for so many decades.

Over the next few days, father and daughter enjoyed warm moments together. Soon Aggie and her husband had to return to America. A few weeks later, David Flood entered eternity.

End of Part 3, but the story’s still not over.

Join us next week for Part 4 of the Floods’ story. So you don’t miss out, click on FOLLOW US. In the page that opens, fill out your email information on the right hand side of the page. Our posts will be delivered directly to your email inbox.