Children of missionary parents experience firsthand the richness of another culture. Yet they often struggle to come to terms with their life experience.

Moving between cultures before he has had the opportunity to fully develop his personal and cultural identity is what defines a “Third Culture Kid.” His values and modes of behavior take on a different perspective than that of his peers who have not experienced another culture.

Feelings of identity, sense of belonging, rootlessness and restlessness provide challenges of which the outcome cannot always be predicted. Each person struggles with the same issues. However, the struggles and outcomes are unique with each individual.

Matthew Harder shares with us that richness and struggle. Join us for the next several weeks as Matt reflects and shares his insight as a “Third Culture Kid.” ~Brad Graber

From the Bush to the Bush
by Matthew Harder

Where are you from? Where is home? Over the years I’ve been asked such questions and rarely had a straightforward response.

How do you answer questions like those when you’ve spent a significant portion of your youth running around barefoot in a remote village of the Congo (then called Zaire)? Outwardly I looked like a typical Midwestern white boy from the United States of America.

My appearance belied my experience. This juxtaposition influenced my view and how I interacted with the world. Eventually, it led to my return overseas to work as an adult. 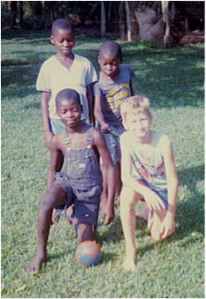 I grew up as a missionary kid in the village of Nyanga. My childhood in the village and on the mission farm was simple and full of adventure. I spoke Kipende with my friends, played soccer barefoot, shot birds with homemade sling shots while always mindful of deadly snakes.

The fact that I lived in a foreign land, spoke a foreign language and had diverse exposure didn’t occur to me. I was a white boy surrounded by the African bush—a minority without knowing it.

When I reached the age of ten, I spent a year at a mission-boarding hostel while I attended The American School of Kinshasa (TASOK). After our family moved to Kinshasa I continued my attendance at this international, culturally diverse, and academically solid school.

During my mid high school years I returned to the USA. I was faced with a common missionary kid (MK) or third culture kid (TCK) complex. I looked like everyone around me, but my internal perspective was different. Specifically, my global awareness and interests didn’t fit in. Plus I lacked any pop culture knowledge.

Since speaking about my experiences and interests didn’t fit in, I spoke little about it. I suppressed and almost forgot a large part of who I had been.

It wasn’t until my first year of college that I accessed this forgotten part of me. I met other missionary kids. Even though we had grown up in vastly different countries and settings, we gained profound understanding as we talked about our experiences overseas.

Through those friendships and conversations, I re-discovered where I came from, understood the complexities better and suddenly restlessness attacked me.

We hope you’ll join us next week for Part 2 of Matthew Harder’s story. Until then, may you experience God’s blessings as you seek Him.

Click here to follow us. Fill in your email address on the right side of the page that opens and you’ll receive our posts in your email inbox weekly. You’ll never miss a post.